Our cat died yesterday and it’s been pretty sad for my family, so naturally I’ve been trying to get some material out of it. The situation, I mean, not the carcass of my cat.

I’ve turned to literature to console me through the pain, so I’ve started off with classic children’s horror and traumatisation fest Goodbye Mog. It’s a book designed to give to kids to warn them about pet’s death. It’s a bit like The Fault in Our Stars, but instead of cancer it’s euthanasia, and instead of love-struck teenagers, its Debbie and Nicky; two children who manage to milk the death of their pet into over ten pages of literature. Milking the death, I mean, not their cat.

This was a bit like what happened to us, except my cat died at the vets under heavy sedatives, and not because he was quite nice. Also we don’t have a basket because he preferred to sleep in my dressing gown, usually after having vigorous, juicy sex with it.

Here, Judith Kerr is portraying Mog as a spirit hovering above the dead Mog, to further illustrate the inevitability of death looming over each and every one of us. Good one, Judith. 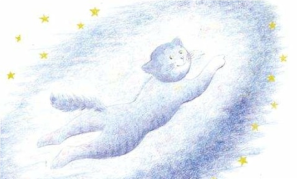 The book is about Mog’s spirit watching over the family, making sure they can cope without her now that she has gone. When she is satisfied that they will be alright, she then returns to space, like the little furry dead astronaut she always was. 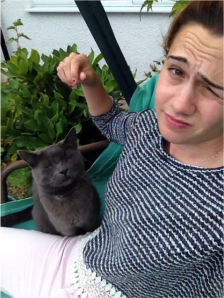 I’m sure all these thoughts occurred to Jekyll at some point, but probably not before a massive blood clot dislodged itself in his spine and paralysed his back legs.

I have a pre-existing blood clot

We are all gutted, particularly George, who, in a grief-stricken state, hastily consumed a whole sachet of As Good as it Looks before almost immediately vomiting it back up again in Jekyll’s favourite spot on mum’s bed.

Much like most other cats, George actively chooses not to believe in the concept of an afterlife, as he feels that the idea of heaven is futile if man is predetermined to live their lives a certain way before finding out that way was potentially wrong and thus is forced to spend an eternity in hell.

You were more than just a cat, you were a puma.