I have the kind of face where people are always asking me what’s wrong. I have a perpetual sadness that is so ingrained into my face what whenever I have to leave a room, people always make an extra effort to say goodbye to me in case that’s the last chance they’ll ever get to say it.

But then they always seem to be slightly disappointed when I show up again.

I know that look because it’s the same one that I give to my grandma every time she leaves. She wants me to teach her how to use Skype soon, but there’s only so many nice ways of saying that there’s no point, because she’ll probably be dead soon. She asked Lizzie once to help her out with sorting out her clothes, and Lizzie said, “Well, how long were you planning on being around?”

Having depression is kind of like that, because it’s impending. All the lights go out in your brain and you’re left shamelessly groping around in the dark. It feels like everybody is staring at you like you don’t have eyes, they’re just black holes which show that everything through them doesn’t have any light anymore.

It doesn’t get light again until you find the fuse switch, which can take months, depending on how hard you look for it and how much you really want to look for it. 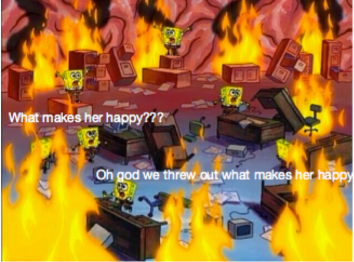 I did a couple of lines the other week and about half an hour later when it started to kick in, my friend goes “so, how do you feel?” I analyse my body internally and conclude, “Yep, I feel okay”.

She looked at me with sudden pity and goes “wow, you must be really sad”.

It’s ugly. It’s very difficult to describe. The closest feeling I can align it to is guilt, it’s that kind of consuming emotional dread. In my final year, dappling with antidepressants, I got myself down to a size 6, and terrified a boy I was sleeping with when he ran his hand up my thigh and felt the cuts.

That’s what depression is. It’s not changing your underwear for days, to the point where they probably don’t need the elastic to stay on your body anymore. It’s not eating, even though that’s literally your favourite thing to do. It’s waking up, then shutting your eyes tight again so nothing becomes real yet. It’s going into public toilets and standing with your face against the bathroom door, trying to make yourself want to breathe, whilst a demon consumes every internal part of your body.

It’s listening to Damien Rice and thinking he ‘gets’ you. (what the actual fuck?)

I did my first five minutes in a London club last night, and I died. I literally spoke for five minutes to silence. There were 20 acts in the night, they get pulled randomly to perform, and I was 18th. By the time I actually went on stage, I didn’t want to hear myself do comedy.

I was so nervous, and my opening line didn’t go well, so then I got thrown off and half-heartedly tried to carry on to an audience of tipsy men with furrowed eyebrows, who definitely didn’t want to hear about my vagina.

Everyone’s got to die once in a while though, and as we all know from Batman Begins- notoriously the climactic triumph of the Batman trilogy- we fall to pick ourselves back up again.

And I will pick myself back up. But first, I need to get into bed, and not get out for a really long time.