I hate this season because everywhere you go you see Ibsen-esque, dishevelled Christmas trees dumped in the streets, bedraggled and sagging. They all look like they’ve given up three Ubers into the journey home from a big Friday night at Cargo, and now lie stranded on the curb, barren of all the nights adornments, and poor because they spent £10.50 on a single vodka and cranberry. 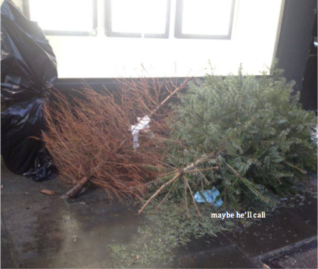 I like to pretend that the one outside my house has been left there by my cat as some sort of massive stick he’s found in the park.

I managed to get an upgrade on my iPhone 4, so my resolution’s gone from a measly 960×640 to a hefty 1136×640, so I’ve made about 113040 resolutions for the new year, if resolutions are the equivalent of pixels, and you’ve got to be a terrific dullard to dispute that.

My New Years was all right because I did a party, and I’ve never done a party at my house, so it was all fresh and exciting. Suddenly my house became unfamiliar territory but inside my own home, like when you pull a plaster off a damp bit of skin after you have a bath.

I scored some super-fly Grade A+ dank weed and also snacks such as Asda’s value onion rings and Asda’s value cheese balls. Everybody brought cool spirits like gin and vodka and we played games like drink it really fast and see who wins. Then I got too high because I was really excitedly talking about trading limit act Jagex instigated on Runescape in 2007 and had to lie down on my bed for a bit and not think about it. I’m also not very good at inhaling so I smoked most of it into my eyes, which as we all know are quite the responsive orifices for stimulants such as drugs and burning.

But also there were some rubbish bits like when my cat got into a decorative hamper my mum got for Christmas, mistaking it for a litter tray and then doing a wee in it, so now our carpet is dyed pink and we have to put her down. Also, I let two friends sleep in my mum’s bed and I went in the next morning and there was a cat wee on it too, so I had to hurry my friends out of the room so they didn’t see it and rightfully think that’s how I live my life.

The party made me think a lot about high school because I never went to many parties, and I didn’t go to my prom or Leaver’s Ball because I’d seen Ten Things I Hate About You and decided that I was going to refuse to go on account of feminism. I went to an all girls’ school so thinking about it now I’m not too sure of the extent to which the feminist agenda was challenged by 300 girls celebrating seven years of school together, and sometimes I go clubbing now and men rub their crotches against me and we call it dancing.

For an all girls school, prom is a mass exodus to Debenhams to buy ‘that’ navy blue dress, and I was no exception, imagining how good it would be if I put one on with all my make up and a long wig and showed up and everyone would tell me how pretty I was underneath all the facial hair and grease. What actually happened was that all my friends had quite a nice time and I sat at home playing a lesser version of Runescape, but it was all right because I was really good at that game so I bought full elegant clothing (worth almost 1mil gp) and wore it all evening.

Also I just packed up my laptop to leave and go and write in the café, but I’ve just realised I’ve got £40 in my purse and that’s all the money I have left in the world, so I’ve just had to unpack all my stuff again and sit in the kitchen and apply for some jobs.

One thought on “‘Tis the Treeson”