Standing alone in the train station at midnight, as if from the depths of my paranoia, a scary man in a hood with comes right up to me and says the following words:

He pauses whilst he considers my conundrum for a while, before offering:

“If you’re cold, you should dance.”

I really wish I could dance. I wish I could dance so well that in clubs, boys look at me and think that I’m skilled at sex. Much like the phrase, “behind every lie there’s a kernel of truth”, behind every dance move I attempt to pull off is the fact I didn’t have my first kiss until I was eighteen.

For practice, I dance sometimes at a club in Stoke Newington.

I like eating a really massive portion of chips just before I go out because I like to think that if boys don’t come up to me in the club at least I’ve had some nice dinner. Unfortunately, equipped with the blind optimism of every girl who has ever tried to wrangle themselves into too-small white skinny jeans from the Joni section in Topshop, I look like a drunken kangaroo attempting to strangle a chip-based baby kangaroo inside its pouch.

My dancing. I know for a fact that I look good sometimes in my room when I dance, especially when the right music is on;  inexplicably aggressive hip-hop. Sometimes I point at myself in the mirror and whisper assorted encouraging words from the song as well, because it makes me feel sexy and also less alone.

I do this sort of body-pop flowy sensual motion, but my bedroom has a lot of creaky floorboards, so I’ve had to incorporate minimal movement from the waist down so as to keep my dignity in tact. This restricts pop and flow to my arms and eyebrows, mostly.

It’s not hot. But he’s right – I do get pretty sweaty. Well, the top half of me does, anyway. 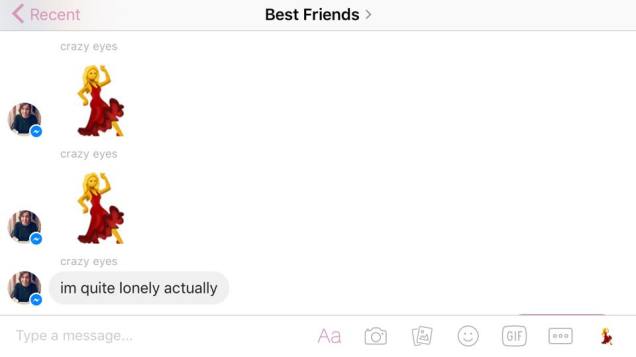