One of the ways I can tell I’m really sad is that I’ll go onto my Facebook photos, press the left arrow and then end up on a three hour long montage of my life as though I’ve died. It’s kind of like watching your life flash before your eyes, but with a lot more comments from people who then went on to unfriend you.

I’m trying to make myself more attractive at the moment, and become more of a ‘woman’. I’m not fussed about the idea, but I must admit it is quite nice when someone correctly identifies my gender first time, a skill that was touch and go in high school. 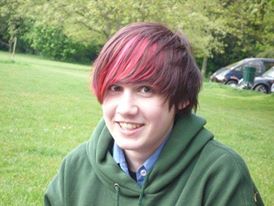 I go through phases of hating my stupid ugly body and face and hair, and other times where I really just can’t stand it at all. I’m trying to avoid wearing underwear that comes in a five pack from Primark. Okay, I’m wearing some right now, but that’s because it’s fucking comfy and you know what if that’s how I want to live my life then I bloody will, and you can take your lacy thongs and shove them right up inside your arsehole, because that’s where they’ll end up anyway.

Going back through the old pictures on my Facebook makes realise that I’ve never really been destined to be good at being a ‘woman’. I never really invested in it, and in year nine I think the fanciest makeup I had was a purple eyeliner that came free with Shout magazine. I woke up early to put it on before school, but I didn’t know how to put on eyeliner at all so just sort of free-styled it, and then got into class late for maths but feeling fierce, and then one girl peered really closely at me and said “EURGH Katie’s got an eye infection” and then other girls crowded around to look at me and I’d been kind of maybe excited about school that day because I thought I looked really pretty with my new purple eyes, and now they were just holding back tears. Later on, a kind soul in maths class leaned in really close to me and said “it’s okay, its just sleep dust, sometimes I get purple sleep dust in my eyes too”.

That was the same year I left my bag open on my desk and went to the bathroom, but whilst I was gone a couple of girls went through it all, getting out the two balled up pairs of skin coloured tights I had in my bag, an extra pair of Primark underwear and several seemingly industrial sized panty liners. In those days I barely had nipples but when I got my period I bled so much I began to worry that I was doing it wrong and perhaps every month I was accidentally birthing an ovary.

Possibly most embarrassing in high school was in about year ten when I went to the toilet and forgot to lift up my school skirt all the way. Lifting up my skirt to pee was new to me. Before that, I thought you had to pull them down like trousers. I got the mechanics wrong and accidentally peed all over my school skirt. My own body was rebelling against dressing femininely.

Earlier in the term I heard a rumour that a couple of girls in my year had gotten high in the girls toilets. I secretly hoped one day they might invite me. Holding the back of my skirt under the pitiful hand dryers, I suppose I had weed – and at least mine didn’t get me suspended. I guess they were the real losers.