One day in primary school I was off sick and ended up watching the television channel Living, presumably an ironic jibe at the viewers watching its content at 11am on a Tuesday.

“She’s FAKING” My sister shouted as mum closed the front door. I have always been the runt of the litter, despite being the older and larger sibling.

Alone, holding the remote in one hand and fishing a particularly crisp bogey out of my nostril with the other, I stumbled upon a documentary on the paranormal. Its target audience was not a nine year old with an imagination as massive and capable of expansion as her front teeth.

In the show they investigate rumours of the paranormal. A man claimed he had seen Anne Boleyn wandering around Hampton Court. The show recreated a CGI version of a ghostly old-timey woman floating through walls.  Her head was still attached, but mine had just exploded clean off my surprisingly broad shoulders. 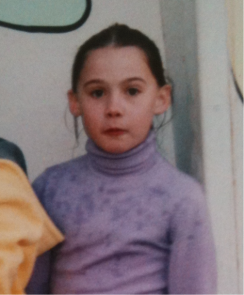 I watched that show, fascinated, for an hour. And then the credits ran, I wiped that bogey down the side of my mattress, and kissed goodbye to my childhood.

I sat bolt upright that night for four hours, with three cushions propping up the weight of 200 years worth of ghostly history. I didn’t even play ‘Hey Ya’ on my Walkman, which previously I had been listening to every night, pausing between lines and writing all the words down in my notebook. Learning the words to a songs in the 90s was an arduous task without the internet, but thankfully Hey Ya has proved a fruitful investment that just keeps on giving in clubs up and down the country.

I wasn’t rehearsing that night though and none after that either. I was busy waiting for the paranormal to emerge through my bedroom wall and give me the fright of my life. They were on their way. I could hear the sound of a tiny little dead ghost army marching up the stairs to my bedroom, which sounded almost exactly like my heartbeat.

‘It’s okay, I’m nice’ I whispered into the room, which didn’t make any difference. I lay there with the main light on and both eyes open, Big Bird poised on the pillow next to me, ready for battle. What good could one girl and her trusty stuffed duck companion do if the paranormal came through the wall and did paranormal stuff though? Nothing. We were sitting ducks. Well one of us was, and the other one was just an inanimate stuffed animal.

I clambered into bed with my mum and dad at about 11pm. Unfortunately that’s where they both sleep, and I’m a thrasher, so moments later my dad marched, completely naked, into the spare room. Interestingly this is where he spent the rest of my adolescence, too.

“I can’t sleep because of the paranormal” I try to explain to my mum.

“They don’t exist” she snapped, trying to negotiate a spoon and a half’s worth of Calpol past my front teeth. We didn’t have sky plus at the time so I couldn’t show her the cold hard facts of life on the Living channel.

“When was this house built?” I ask my dad as he leant out of the back door, smoking.

“It’s brand new” He said dismissively, before stubbing his cigarette out on the Oriental garden rockery I lovingly built over the weekend. He was just trying to help but I knew he was lying.

I learnt to sleep upright until further notice and I lived in fear of anything ghost related.  I can’t sit through anything resembling a scary movie. I still terrified now if I’m honest, but quite recently I watched The Ring and realised that my TV is quite high up on the wall and if any paranormal creature did climb out if it, the impending fall would be pretty silly.

One thought on “Nightmares, Right Mares”